When you are stuck in conversation with a relative.

Kids on the Slope is markedly different from the other Shinichiro Watanabe anime we have reviewed this month. Firstly, the series is an adaptation of an existing manga, as opposed to the anime originals that Watanabe-sensei is best known for, like the titles reviewed earlier this month. But that doesn’t mean the anime doesn’t have the distinct ‘Watanabe flavour’ (patent pending). Watanabe-sensei and longtime collaborator Yoko Kanno have injected their musical juices into the soul of this anime with amazing direction and background score selection, to accentuate (yeah I know, big word) the feelz. Additionally, the music is not merely an aesthetic choice, but integral to the plot. Another thing that may strike one as different different is the recency of the series when compared to the previous two, which translates to better visuals, better audio, and a better experience overall.

That being said, Kids on the Slope is, at its core, a story about three kids. The story starts as Kaoru, a guy who’s used to moving from place to place and living by himself, transfers to a high school in Kyushu (the far south of Japan). On his first day there, he meets two people who will be a formative part of his high school years: Sentaro and Ritsuko. Sentaro is a drummer and juvenile delinquent: a jazz-powered pummelling machine who brings the same intensity to music as he brings to fights. Ritsuko, on the other hand, is a soft-spoken, simple girl, who is tasked with showing the new kid around the campus. It is love at first sight for Kaoru, but matters are complicated by her also being Sentaro’s childhood friend. The story focuses on Kaoru’s experiences: in highschool, in music, in puberty.

The visuals are simply breathtaking. The level of detail that has gone into each shot, each frame: truly amazing. Everything, from the background to the faces, even the clothes, is well-drawn. The colour palette is not as varied as its contemporaries, but suits the series well in the aesthetic it’s going for. I’m usually not a fan of the film grain filter: it’s the first filter every amateur uses to give their videos and photos that ‘cool look’ of old school movies, with a lot of noise and oversharpening, making it look like a semi-deep fried meme. The tasteful application and period appropriateness, however, works in its favour here.

The scene of the crime

The visuals may be really good, but what truly sets the series apart is the audio department! This is one of the best music anime of all time, for me. Sure, it may lack great OP and ED songs, but it more than makes up for it with consistently on-point track selection throughout the series. Everything from the jam sessions to the background score is bang on. The intensity in every jam session and performance was turned up to 11. The panning shots, the sound, expressions, it really gets you going. It’s almost like a sports anime. You just wanna sit down with your instrument and let it rip.

I'm moanin' that it's over.

The voice acting was really good, too, as is the norm (except for Ritsuko’s, which felt a little odd for a high school kid; a bit too refined, maybe, when compared to Sentaro, who grew up in an almost identical environment).

The show has a small cast and focuses on them pretty well. Even semi-major characters get a decent amount of development. A highlight would be Seiji, a ‘rockstar’ who just wants to be popular and wants girls around him. The guy is introduced as the cliched narcissistic attention hog, whose main purpose is to distance Sentaro from Kaoru, but with time, we get to know his motives and why he really wants to be a STAR.

A great performance, but not for me.

The characters of the anime are nothing new to be honest. They fit archetypes you’ve seen before, in plenty of anime. But the execution is top-tier. The unique bromance between Kaoru and Sentaro sets the show apart. Both characters feel out of place and lack a sense of belonging, which is what helps them get closer to each other. Ritsuko, despite also being a well-written character, was not a standout for me, maybe because I focused on the bromance a lot. She did have her moments, though; in particular, she portrays the pain of being hurt by someone close to you really well, maybe even better than Kaoru. 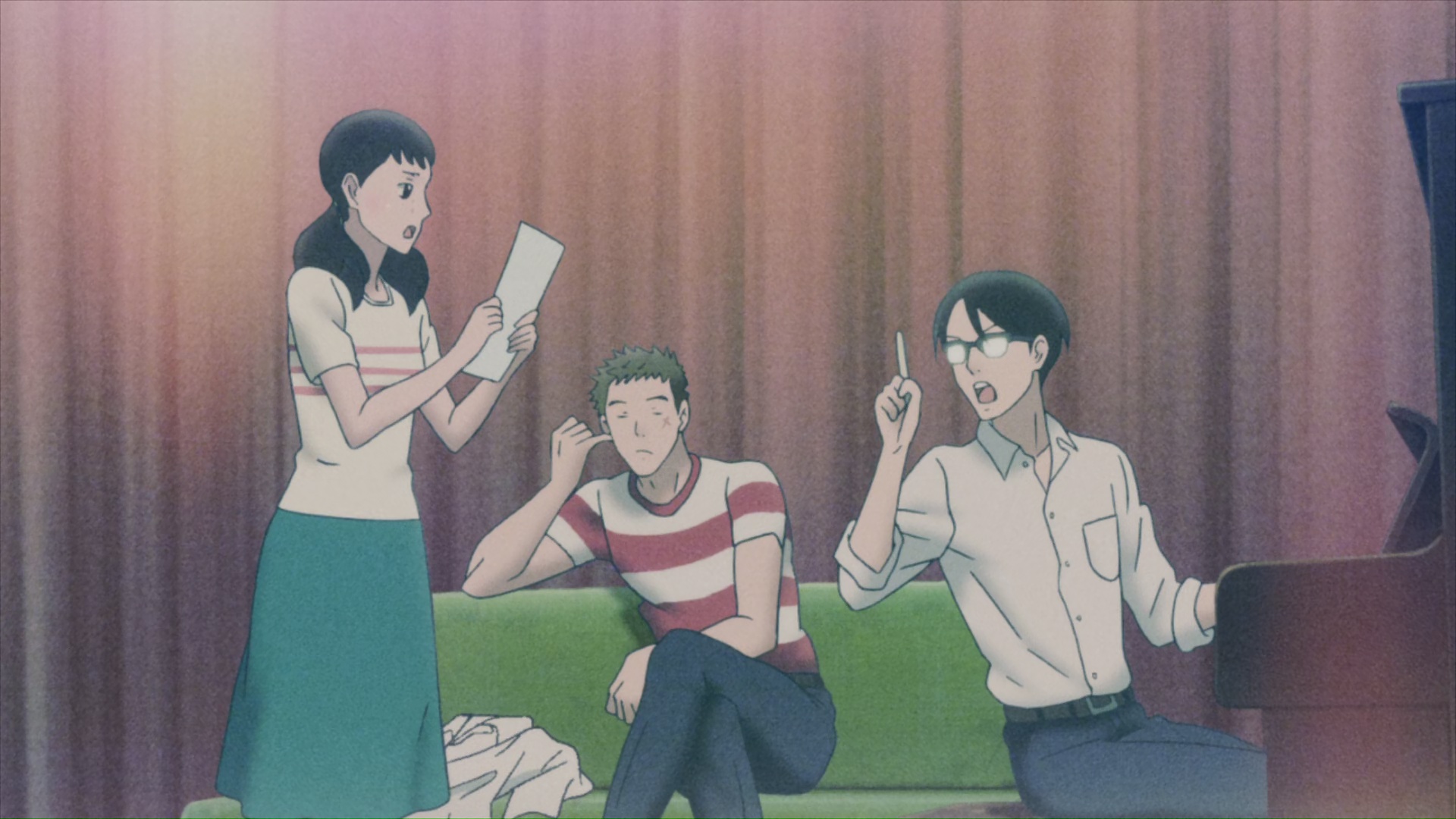 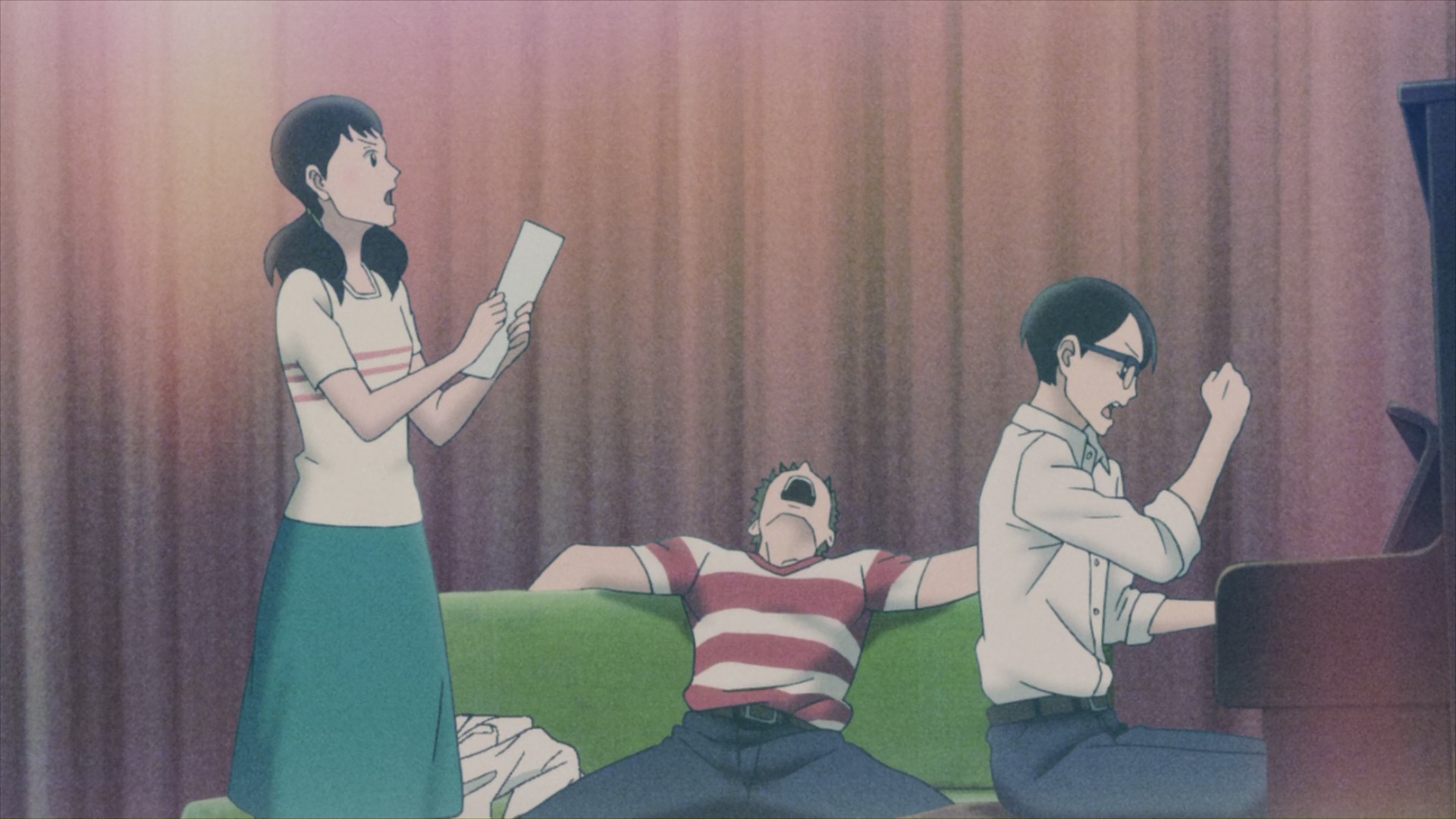 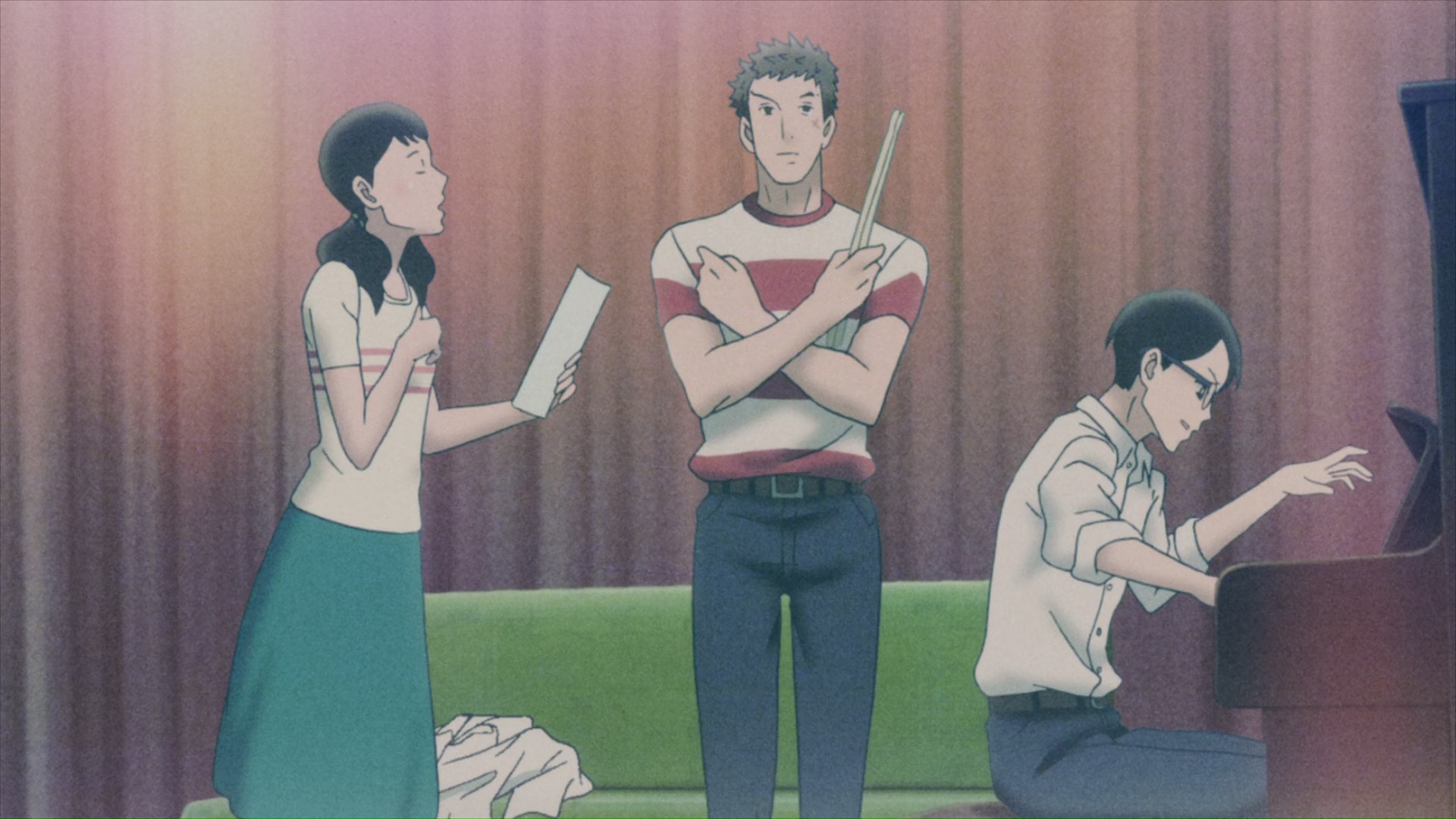 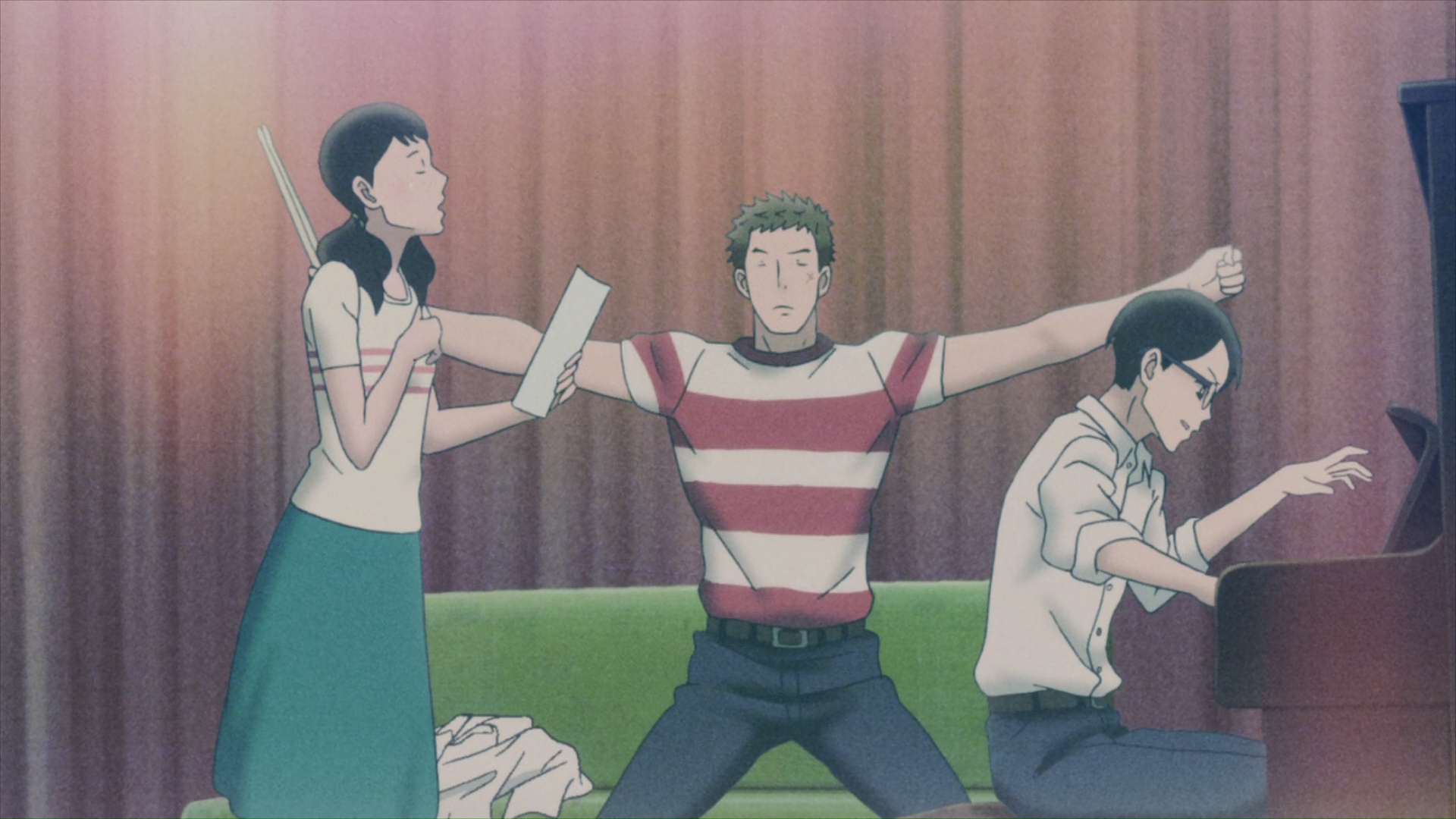 Happens in every band

I could feel Kaoru’s pain the most, partly because the story focuses on him the most, and partly because I could relate to him the most: moving house frequently, not having any long lasting friendships, yearning for a bond, not being able to say what’s in my heart, having your heart broken. His growth, from being a loner to having two friends who he cares about so much that he’s scared to lose them, is one of the highlights of the series.

I've become so numb, I can't feel you there. Become so tired, so much more aware.

The most surprisingly great part of the anime was its pacing. They fit 3 years of high school into 12 episodes without giving off the feeling of stuff being left out. They covered the emotional rollercoaster that is high school, in a way that makes me reminisce those days and regret the stuff I didn’t do. The writer did a great job, with the story progression being the right speed, and even the most minor details of the period being brought to life.

This is one of the best music anime as well as one of the best high school anime, with the romantic struggles of the koukousei life serving as an excellent plot device. You could really feel the pain, the excitement, and the butterflies in the stomach with the characters, and the excellent storytelling made it a really immersive experience.

Seemingly generic characters elevated by the unique chemistry between them.

Like many highschool dramas, the story and its plausibility is not the focus. The focus is dem feelz.

Good use of film grain.

Hippity hoppity, loser is property (of the student council)

Mahjong Tiles and Ballz of Steel